Today in our extensive HighFleet guide series the art of ship building. In this article we’ll give you a bunch of techniques, philosophies, concepts, and handy tricks on how to […]

Today in our extensive HighFleet guide series the art of ship building. In this article we’ll give you a bunch of techniques, philosophies, concepts, and handy tricks on how to build the best ships. As we’ve covered in our complete beginner’s guide, the Shipworks aren’t the ideal place for beginners. If you have a solid understanding of how the game functions and what you need from a self-designed ship, this is a tutorial for you!

Everything we cover are things I test and apply in my own playthroughs, but I wouldn’t have been able to without the HighFleet Reddit and Newageofpower’s amazing Steam Community guide. With shout outs out of the way, let’s take off.

So as a preliminary HighFleet ship building guide to greatness: build ships with purpose in mind. Whatever you’re building must always be specialized, rarely a jack of all trades. Below you’ll find many examples of why this design philosophy is important.

The art of absence

I gave the example of a tanker in a previous article. It needs to carry a lot of fuel and not use much itself. So building a tanker does not require armor, guns, sensors, or other stuff. It doesn’t need to be maneuverable, preferably just quick.

Fighting ships also require you to really think of the application of it compared to its cost. A ship meant to take cities by surprise needs to be fast and small, so armor isn’t a priority. If a ship needs to be able to withstand some punishment, more armor, active countermeasures, weapons, and other jazz come into play.

Here’s are some examples of how not to do it: A fighter with sensors is super expensive because it’ll inevitably lose costly sensors in battle. So ideally your scanner ship never enters combat, therefore it doesn’t need armor or weapons. The opposite is also true; if a ship is meant to fight, it only needs modules to help it achieve air superiority.

Conversely, taking standard HighFleet designs and improving them can help you out immensely. For example, if you buy a Vokshod X2 or Yars Mk2 (seen below), notice how they carry unncessary crap. The Yars is a long range missile launcher, yet it has armor. It should never come close to damage.

The Vokshod is a recon support ship. Yet it has two low caliber machine guns, presumably to shoot down enemy missiles and planes. But it rarely comes to that, so it costs way to much to haul all that dead weight around.

So, the art of absence describes a thinking pattern where you only outfit a ship with things it actually needs. The striptease part works on existing ships that need to shed some pounds. A ship has one purpose, therefor everything else you put on there is a waste of money. Or worse, excess armor, guns, thrusters or fancy modules could inhibit its fighting capabilities. Strip a ship of everything it does not need.

Next, let’s dive into actual building. When designing a ship, say a fighter, you’ll want to think about where to put things, right? Every fighting ship needs a bridge, thrusters, fuel, power, ammo, and weapons. As we’ve explained in our HighFleet combat guide, ship building requires you to think about which parts are expendable, and which ones aren’t.

Because of the ‘2.5D’ combat design of HighFleet, you’ll know which parts will receive damage first; the ones on the outside. So obviously, any armor is stuck on the outside of the ship. Let’s work inwards now; which components should go where? 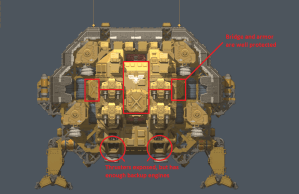 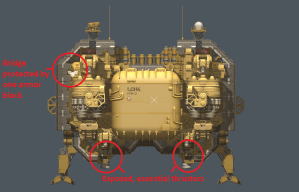 Another huge tip no HighFleet ship building guide could do without, is the use of smart elevation. While damage is registered over a 2D axis, there’s a third that comes into play when you fire projectiles. The Z-axis.

Some components like large fuel tanks block projectiles, thus creating dead angles. The standard Archangel (below) can’t fire both main guns simultaneously to the left or right, only up and down. By elevating a 2×2 hull part on the Z-axis, guns can fire over large fuel tanks. That can make all the difference in a fight, depending on your position. Here’s how you elevate a hull part:

Lastly, I briefly want to touch on placement of modules in a tight as space as possible. The less real estate you use, the smaller a target you are. You also weigh less, making you more maneuverable and cheaper to run in terms of fuel.

On technique to do so is by using little nooks and crannies that basic hull shapes leave behind. Just check out the image below. Shoutout to Newageofpower for finding this one. The original author is u/Facehurt but I couldn’t find him on Reddit. If you’re out there, you’ve made many of my builds significantly smaller!

Image credit: Microprose
Header image demonstration based on the Yevpatoria by u/Daniellecarth