In our extensive HighFleet guide, we’ll give you a bunch of tips to get started in this equally awesome and frustratingly vague indie strategy game. I’ve compiled a list of […]

In our extensive HighFleet guide, we’ll give you a bunch of tips to get started in this equally awesome and frustratingly vague indie strategy game. I’ve compiled a list of things I wish I knew when I first booted up the game. But alas, I’ve lost many a flagship to missile spam already.

Highfleet might be a bit deceiving with it’s magnificently bombastic combat and constant display of military power. You might think you’re an army, ready to lay waste to the land of Gerat. But the story of HighFleet tips the scales all the way in favor of the enemy side.

You’re the last of Gerat’s rule, a kingdom overthrown by rebels and chaos. You want to regain control by capturing the enemy base, way up north. That should be the only priority; you’re not supposed to capture every city, nor are you tasked with obliterating the enemy forces.

I can’t stress enough how important this realization is for a starting player. Too often I see beginners desperately ask questions about their disastrous military campaigns and conquests on the HighFleet Reddit. The reality is, you’re essentially a guerilla fighter on enemy turf.  You only want to need to fight the battles you can win.

2. Hide and seek (and destroy)

In that same spirit, it’s imperative that you behave like a guerilla fighter, not a regular conqueror. That means staying hidden for as long as humanly possible. Enemies will visually spot you at a distance of around 100 kilometers at noon. So unless you are quick enough to engage them before they have time to raise the alarm, stay away!

It gets a bit trickier with advanced fleets like the Strike Groups that are constantly hunting you. They have both Infrared sensors and ELINT, a radar detection system. Both can pick you up over great distances, sometimes well over a thousand kilometers.

That means that you should be aware of the locations of your enemies at all times. In case of Transports, you can benefit from tracking them. In case of Strike Groups, Aircraft Carriers and Missile Launchers, it’s for your own survival!

3. Do NOT touch the nuclear button (unless you want to see nuke go brrr)

A quick one that is also essential: for the love of Romani and all that is holy, do NOT touch that nuclear button. At the start of each campaign, you get two nukes for free. You might find more along the way. Never use those, unless you have no other option left. And to be clear, we’re not saying it’s unethical to use nukes against your enemies. In fact, by all means, let ‘em burn! They usurped your throne to begin with.

What I am saying is that initiating a nuclear strike starts the ‘nuclear war’ event. In which case the enemy starts using nukes as well. They are devastating. And trust me when I say that they have a few more than you do. It’ll be your doom. One exception: when you are destined to die, just fire ’em to get some quick additional points as a bonus for your next playthrough.

As a Tarkhan, you’re seemingly on your own in a huge region, overrun by hostiles. However, within certain cities, you’ll find likeminded lords like yourself. At the start of the game, you get one general location of one of those characters (right hand corner of the tactical map). Go for that one in as straight a line as possible. After that, keep looking for them on your way to the target city of Khiva. 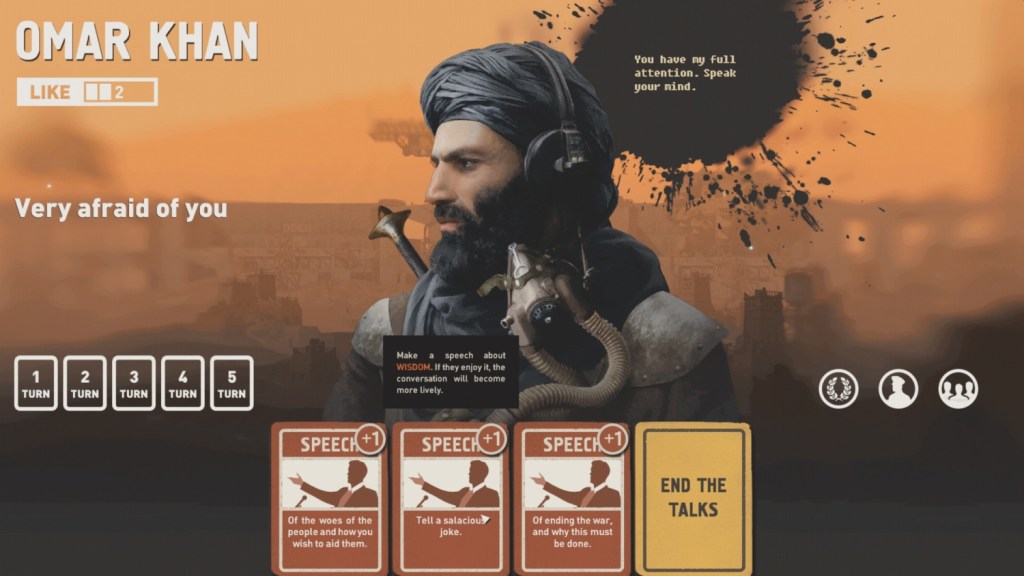 Which Tarkhan spawns where is always random. What isn’t random is the benefits of recruiting them. After a quick minigame (try to match their preferences with the right cards) they ideally join your fleet.

Not only does that award you with a free ship (sometimes even multiple) but they are now available for help. Using the intercom at te right hand corner (under ‘ask for help’) you can ask them for free money, faster repairs, and even additional ships. Use them wisely, as each request lowers their support. With only one star left, they’d leave your fleet, so never exert them completely.

While it’s tempting to fly into a battle with your biggest, most badass ships, the contrary is strategically best. Smaller ships generally have a higher speed and acceleration. This means you can dodge, dip, duck, dive, and dodge your way through enemy fire, rockets, and missiles.

Why is that important? Because active countermeasures cost a lot of money. Repairing your hull and/or armor costs even more. Lastly and most importantly: big ships consume insane amounts of fuel. So really, the most cost, fuel, and combat efficient way to fight is by mainly using tiny ships.

One way of staying hidden, is by using your radar very carefully. It’s tempting to just leave it bleeping away while you move through Gerat. The contrary is true though; always keep your radar off. Like I said, the spooky enemies have an ELINT warning system, so they’ll sniff you out within a few in-game days. Only use your radar if you’re hunting an enemy, and only if you can afford to eat a bunch of missiles if things go south. Trust me, they will.

No HighFleet tips article would be complete without this game changing strategy on how to actually play HighFleet: using strike groups is the only way to play this game. You couldn’t imagine how much easier the game gets when you adopt the following gameplay strategy.

Gerat is filled to the brim with dangerous, even scary enemy fleets. It may not seem that way at first, because they’re all hidden from you. Whenever you do get a whiff of a vulnerable Transport, or expensive Prize Ships, it’s best not to just charge at it right away.

In fact, you shouldn’t move anywhere unless you’re absolutely sure you want and need to move. Fuel is one of the most important resources, not to mention one of the most expensive. Miscalculating arrival times, wasting fuel in the proces just once can absolutely ruin a playthrough.

So always calculate ranges, travel times, distances and other metrics with care. Dying in a fiery blaze sucks. But not being able to defend yourself because you missed your last few ballistic missiles and now you’re out of fuel because of calculating errors hurts even more. Trust me, I’ve been there.

9. Stay away from the Shipworks at first

One of the more debatable tips for HighFleet cadets is: stay away from the ship builder for a while. Of course, the Shipworks are one of the reasons why HighFleet is so appealing to many. But the game explains absolutely nothing.

Without any knowledge of what modules do, what weapons are useful in which situations, and how high the thrust-to-weight ratio needs to be to reliably intercept Transports at noon that move away from you with a speed of 96 km/h, you’re useless in the Shipbuilder.

In fact, because the game doesn’t explain anything (and even withholds certain stats in the builder for some reason), you’d only be able to build flying chunks of scrap metal. Learn the game, before slowly dipping your toes into the Shipbuilder as you gain an understanding of what does what.

10. Design to fill in the gaps

Lastly, if you are a bit familiar with the mechanics of HighFleet (or just can’t wait), it’s best to start by designing variations of existing ships. The subreddit and community hub on Steam are full of great designs. You can copy them, or make them your own in the process.

Alternatively, start out by designing very specific ships to fill in the gaps that default builds can’t fill. For example, I copied the tanker (seen above) from this great building guide as a means of efficiently hauling fuel.

Then my inexperienced butt went into the editor to supersize it. I didn’t realize its relative fuel consumption almost tripled, rendering it entirely useless. It almost gulps up all the fuel it hauls, so none is left for my main fleet when it arrives. If only I had a guide steering me clear from the Shipworks…

Hope these tips help you start out with HighFleet. The game has a huge learning curve and so many awesome intricacies. Take your time with this one, it’s special! +2 Patience, -1 Force.