As part of our HighFleet beginner’s guide series, today we’ll take a look at aerial combat. For more information on actual strategy and everything leading op to an actual fight, […]

As part of our HighFleet beginner’s guide series, today we’ll take a look at aerial combat. For more information on actual strategy and everything leading op to an actual fight, you can check out our beginner tips guide. With that out of the way, let’s fire up that liquid methane and take to the explosive skies of HighFleet.

First off, let’s get the absolute basics out of the way. For some simple instructions on controls and a basic understanding of what you’re looking at during a fight, check out the official HighFleet manual. Also understand that you’re always at a disadvantage in every fight. The enemy gets to take three ships into battle, you only get to use one at a time.

That means lining up your fleet could be half the battle. While there is no right or wrong in terms of fighting style, there is a general consensus: always prevent damage, instead of mending it. Generally it’s a good idea to start with the fastest, smallest ship you can.

Depending on the type of enemy aircraft, you could do with a simple Lightning and outmaneuver all enemy fire. Sometimes (for example when fighting strike groups) that small an aircraft just doesn’t have the firepower to put a dent in the enemy. In that case, an Intrepid or maybe a Gladiator will do the trick.

As a simple way of making decisions before you fly into battle, here’s a simple flow chart:

Now that we know how to prepare for an imminent battle, let’s fly this HighFleet guide toward the actual combat part. Starting with the combat screen, let’s dive into what is what using this crudely photoshopped image (click on the image to enlarge). Below the image, you’ll find a more detailed explanation of all the important information. 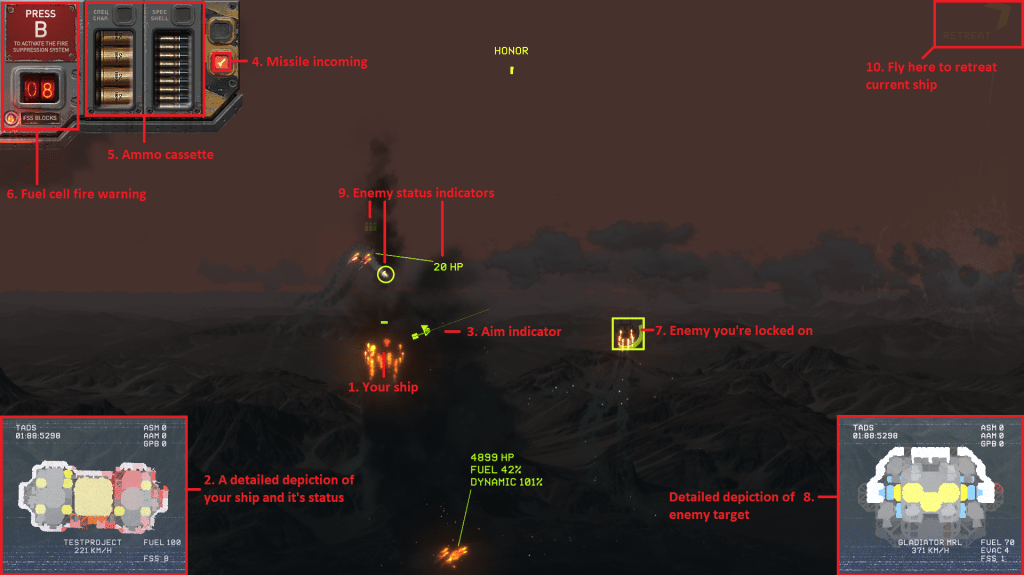 As we said in our non combat oriented HighFleet beginner’s guide, preventing damage is always the best course of action. You can dodge enemy fire pretty easily as they indicate when they’re about to shoot. Additionally, you can use your maneuverability and overdrive (shift key) to quickly dodge incoming missiles and explosives.

Of course, dodging enemy fire won’t win you any battles. In this section we’ll talk about the ways you can destroy enemy aircraft using different techniques. As a general tip: most of these tips involve specific modules on enemy ships. Memorize what parts look like and even how common enemy ships are designed. You can access all earlier encountered standard ships in the Shipworks.

For a final tip before we go into the killing part of aerial combat: you don’t need active or passive defenses to counter enemies. Your guns can do that trick too. You can shoot down any projectile with any gun. Higher caliber rounds are easier to shoot down, but even the smallest bullets collide with equally tiny pieces of lead.

That’s why most larger ships are outfitted with huge and tiny guns; the tiny ones are meant to blast enemy rockets, missiles, and explosive ammo to pieces in mid-air. The large guns are meant to do the actual damage.

Modules you want to target

Before we wrap this HighFleet combat guide up, let’s talk about ammo real quick. There are a bunch of different calibers that muddle up the Supplies screen. There are just a few ammo types though. Below you’ll find an explanation of what each type does and what it’s best used for.