It has been a while since we had a decent game about the infamous Chernobyl incident, which is exactly why I wanted to provide a review of Chernobylite. We were […]

It has been a while since we had a decent game about the infamous Chernobyl incident, which is exactly why I wanted to provide a review of Chernobylite. We were all blown away when the new STALKER was announced, but let’s not forget this one either. Chernobylite is more than worth your time! I mean, radioactive wastelands are amazing set pieces for videogames. No surprise the Pripyat levels in Call of Duty: Modern Warfare were the coolest ones.

A little backstory: the Farm 51’s survival horror game is based on 3D scans and real photos of the actual nuclear plant of Chernobyl. The game already received a bunch of funding from a successful Kickstarter campaign. Is was available through Steam’s Early Access for about two years, and it’s now finally out. Lastly, if you want to experience the game for yourself, get some Steam Wallet Codes from OffGamers here and hop right in! But make sure to read our review so you know what to expect. Let’s go, stalker!

Chernobylite starts rather simple with just a flashback of the main character Igor travelling aboard a train with his beloved Tatyana. Everything quickly changes to a dark-toneand you are being put in a heist-job taking place near Chernobyl.

This is where you meet the main villain of the game – The Black Stalker (we will leave the possible reference to you). After the bad guy kills one of your pals, you escape to go save Tatyana and to get your cold-served revenge.

Mix this emotional personal story with the hostility of the Chernobyl plant leftovers and you’ll get a survival-horror FPS heavily inspired by the Stalker franchise mixed with some Fallout; You have to save your girlfriend in a radioactive wasteland!

Of course, even if the story revolves around your girlfriend, Chernobylite is far from a romantic tale. You go head-to-head with various supernatural monsters and the oppressive organization NAR that seeks to exploit the chernobylite material for their own greed.

If we say a word more about the story progression it will spoil the whole thing. But to warrant a thumbs of in this review: Chernobylite goes into a philosophical way of storytelling. It features time paradoxes, and asks a lot of deep questions.

The character development could have been worked on a bit more though. The voice acting also isn’t super convincing. But it is just enough so that you can invest in the personal tragedies of the main characters.

Overall we found the companions of Igor to be cool and interesting, just don’t expect an Oscar-worthy performance. Even though the game has a non-linear approach, there are some plot holes here and there, but nothing we can’t close our eyes to.

The levels are masterfully crafted and the level of detail is sky-high. You can feel and touch the despair and sadness that surrounds the whole nuclear facility and the forests around it. All those people that used to work and live there… just the thought of it makes me shudder. 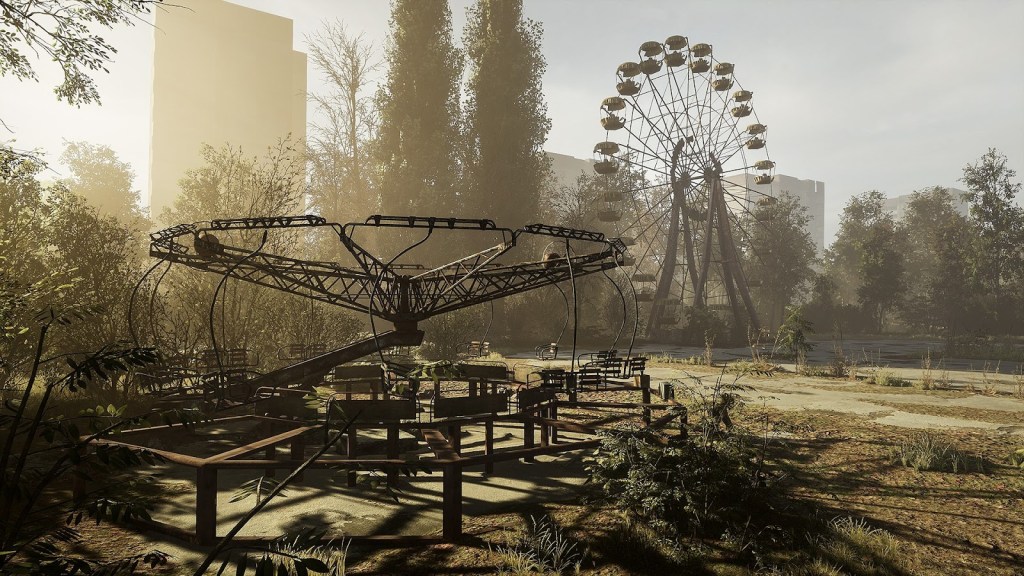 Oh, and Chernobylite’s low light further brings a depressing tone. Though don’t get used to this. The game likes to quickly stun you with a sudden shiny flashback, hallucination, or a real outworld being appearing out of nowhere. This contrast is one of Chernobylite‘s greatest visual assets.

Chernobylite is mostly a game about survival and thus it packs a deep crafting system. You start by looking for materials to build machines with. Those can upgrade your current weapons or create new ones, produce food, and other valuable items.

However, this can be a double-edged sword as it will decrease the comfort level of your squadmates, which affects their HP and other stats. RPG elements are implemented here but don’t anticipate them to be on Fallout’s level.

To save Tatyana, you need to get to the powerplant itself. That can only be done with a team, which leads to another core gameplay element: team management. Finding food and provisions is a must if you want to live another day. It is catastrophic if you don’t care enough for your team!

Your actions reflect on the bonds and relations you as well. But don’t worry too much about that; the game has its own way of reversing things so you can opt to go back and change things again if you are not happy with how it turned out. Every time you die, you travel through a place where your memories and decisions are stored. There you get a chance to change your fate over and over again. 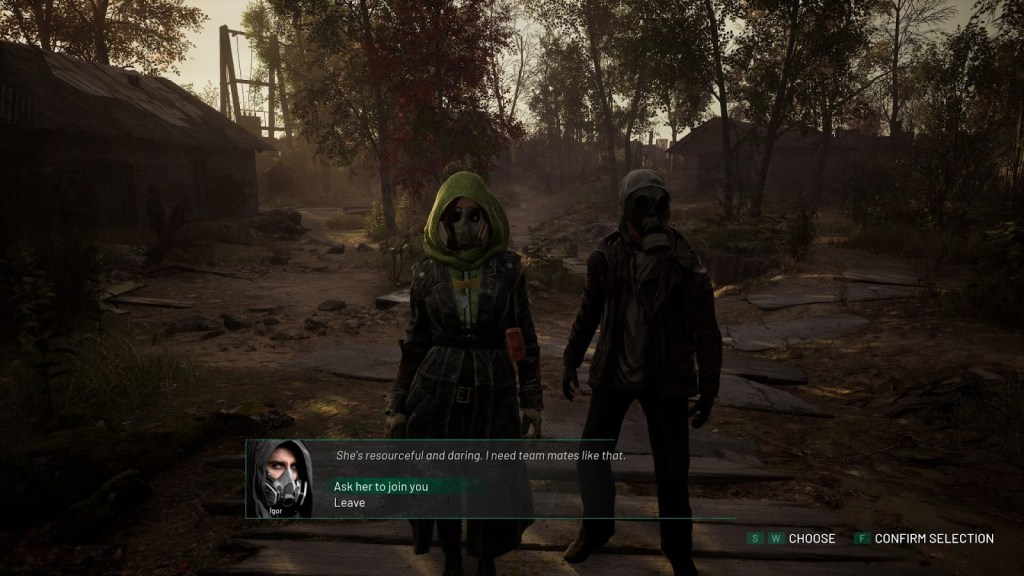 Food and resource management might be troublesome, but wait until you encounter the real nature of what the leftovers of Chernobyl really are! You will fight monsters that warp through space and time and of course the NAR, pushing with their military forces. Being fast and aggressive might be a working strategy in some combat situations, but a sneaky and stealthier approach might be a better ally in some cases. More fun as well, especially if you are a fan of stealth games.

The game is not all atmosphere and storytelling though. And in terms of gameplay, Chernobylite falls short here and there. For example, If you still opt for a combative style of gameplay, be aware that melee combat feels a bit bland. You’re better off blasting enemies with ranged weapons instead.

Another weakness of Chernobylite is that it feels repetitive and even if the maps are wonderful to look at, you have to go through the same place over and over again. You end up seeing most of the game in a short amount of time. 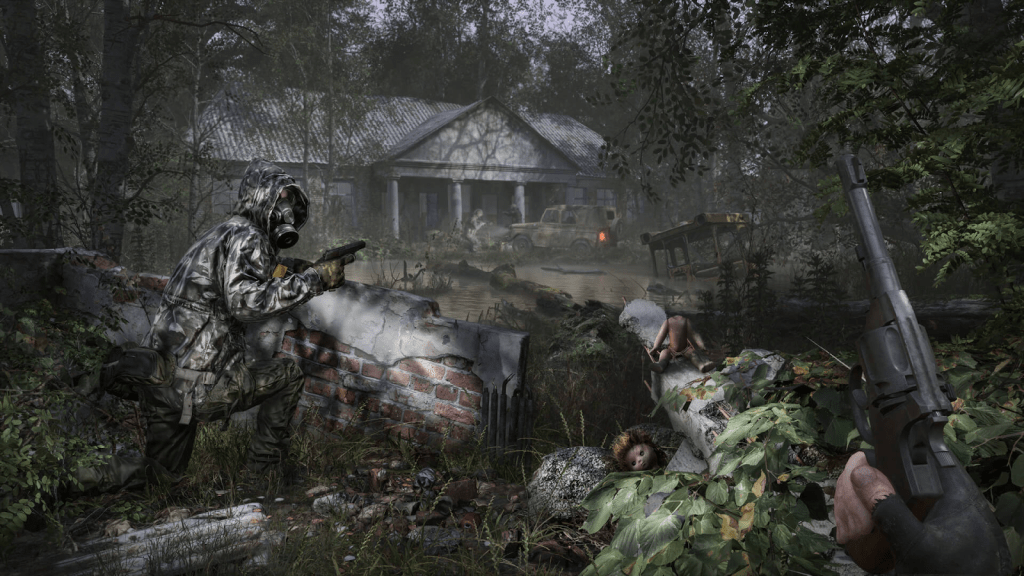 Unfortunately, the missions lack variety as well. Like it or not, you will have to go through some boring missions just to reach the interesting parts. They say bugs can survive a nuke? Well, in Chernobylite there are several visual and gameplay bugs. Big, radioactive bugs like ones where you’re stuck in certain missions and forced to start over.

The game has a unique take on the aftermath of the Chernobyl accident that took place 35 years ago. It was one of humanity’s worst mistakes. Chernobylite, as you’ve noticed from our review, isn’t a mistake at all.

So if you were waiting for a game that can take you near the unfortunate Ukrainian nuclear power plant, then look no further, Chernobylite will be your travel agency to get you there. There are some setbacks that we’ve mentioned above, but if you want to catch the first train to Pripyat, jump in!

Of course, there are real tourist tours to Chernobyl, could you believe that? But you don’t have to do that, just grab yourself a copy of Chernobylite to save Tatyana and beat the bad guys!