Apparently CD Projekt Red wanted Sony to remove Cyberpunk 2077 from the PlayStation Store. A recent post from the Polish developer mentions the decision and their reason for removing the game from the platform. 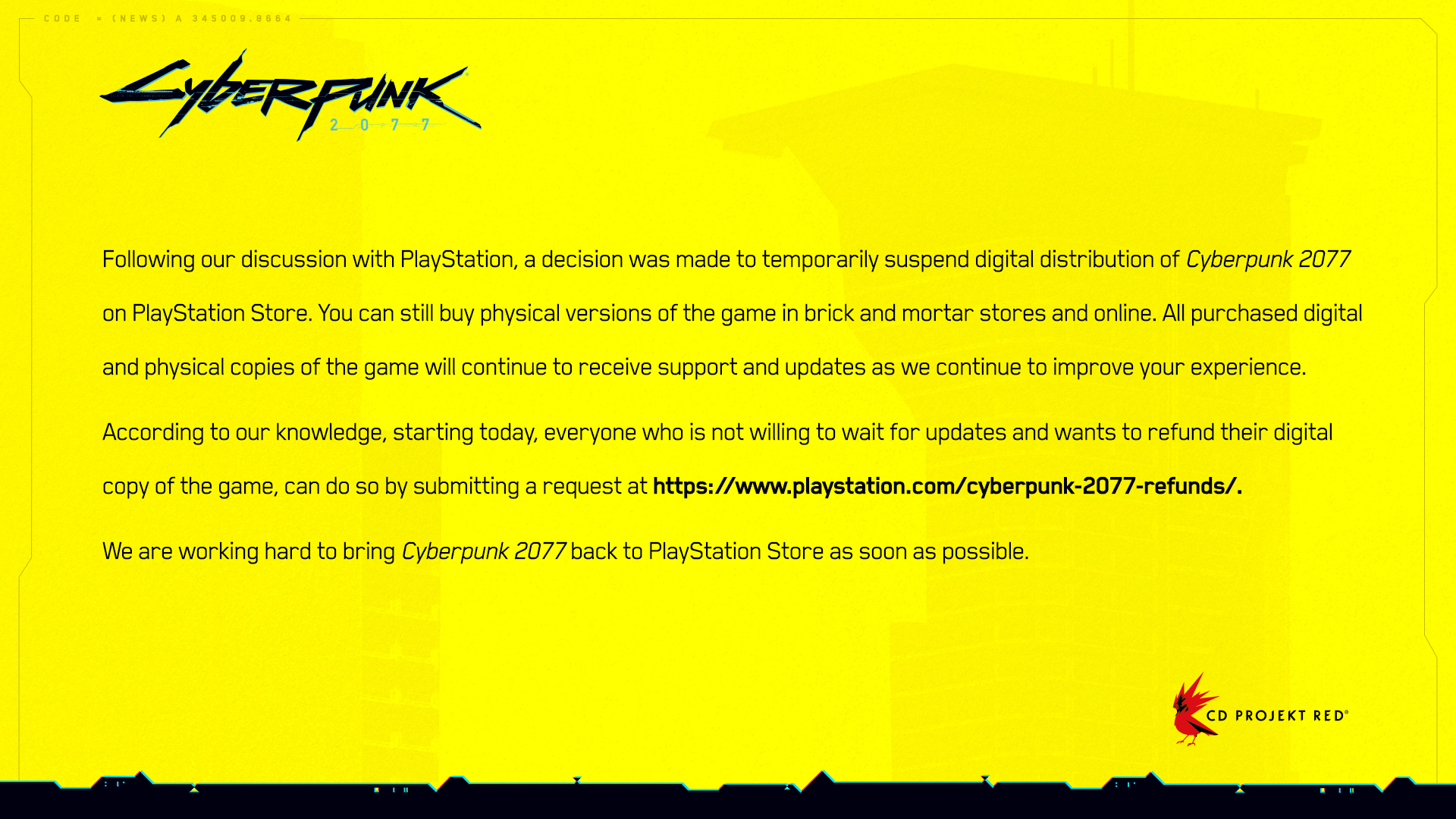 The statement elaborates on the removal of Cyberpunk 2077 and offers somewhat of an explanation for their decision. If you want to request a refund for the PS4 version of Cyberpunk 2077, you can contact Sony support through this dedicated page.

The original article continues below.

After a lot of outrage, Sony has now removed Cyberpunk 2077 from the PlayStation Store. The product page is still online, though everything is not so subtly grayed out.

But for the last couple of days, they’ve been nothing but uncooperative, detailed by CNBC journalist Steve Kovach below. He wanted a refund, but Sony refused as he already downloaded the game. While Microsoft and Steam at least give you a chance (up to 2 hours) to try a game, Sony requires you to know beforehand if the game works on your console. ‘Unless a game is faulty’, which is clearly the case with Cyberpunk 2077. Up until today, Sony didn’t budge either way..

Anyways, at least Sony came through and now accepts refund requests. The removal of Cyberpunk 2077 out of the PlayStation Store might be a bit overkill, but at least something is happening. Many gamers now shift their crosshairs towards Microsoft.

Some gamers complain were are denied a refund, with no possibility to contest Microsoft’s decision. Others did get their money back.

If you’re struggling to get a refund for Cyberpunk 2077, you still have a few days to contact CD Projekt Red through helpmerefund@cdprojektred.com. And for all the PlayStation 5 users that wanted to buy Cyberpunk 2077 but are now suddenly unable to, thoughts and prayers!

Dr Disrespect Is “Suing The F**K Outta Twitch” Over Ban

CD Projekt Red Board Gets Insane Bonuses, Staff Barely Gets Any

Darkwaver517
We use cookies on our website to give you the most relevant experience by remembering your preferences and repeat visits. By clicking “Accept”, you consent to the use of ALL the cookies.
Do not sell my personal information.
Cookie SettingsAccept
Manage consent