On June 11th, Electronic Arts launched the Festival of FUTball, and with it, a revised loot box preview system for FIFA 21. In short, players can temporarily see what’s inside […]

On June 11th, Electronic Arts launched the Festival of FUTball, and with it, a revised loot box preview system for FIFA 21. In short, players can temporarily see what’s inside a loot box before they purchase it.

And in the name of Ronaldo, Messi, and Johan Cruijff (yes, I will shoehorn my country’s most celebrated player in here), this should always be the standard in FIFA from this point forward. Loot boxes are controversial as is, and FIFA is notorious for tying in-game progress to randomized loot boxes. Stop with that nonsense already!

From June 11 through July 16, players can take a look-see inside a loot box (called packs in FIFA) before they purchase it. Every 20 hours and 35 minutes, the available packs refresh, Eurogamer reports.

The preview system only applies to Ultimate Team Preview Packs. These packs can be purchased through the in-game store. Players can spend in-game currency (FUT Coins) or FIFA Points (bought with real money) to get said packs.

There are still regular packs, earned through playing the game. Those still adhere to the ‘surprise mechanic’, as EA likes to call it. 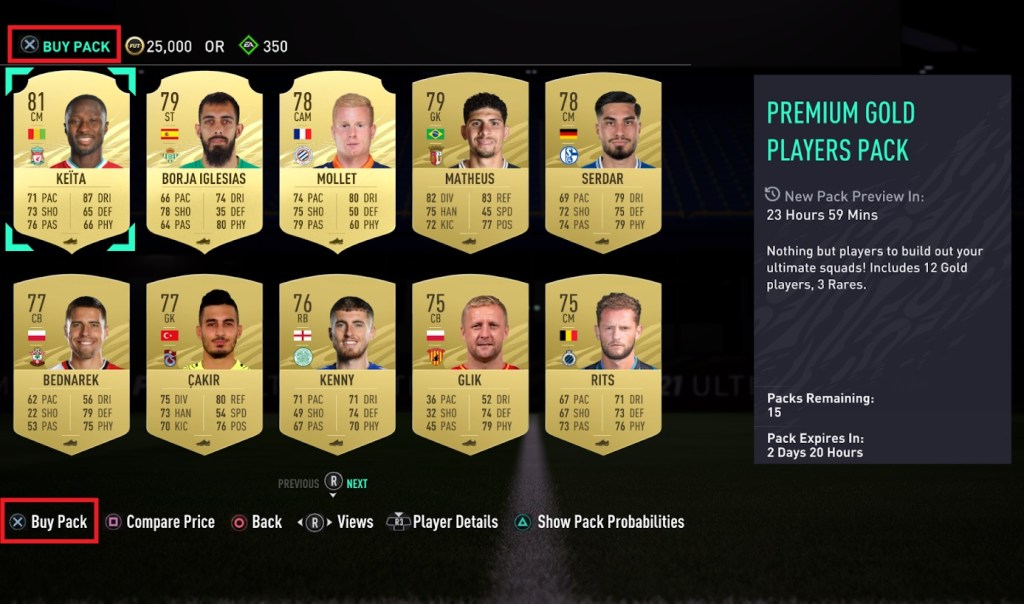 This should be permanent!

Let’s be real, peeking inside a loot box completely defeats the purpose of the controversial mechanic. Both for gamers and the companies providing them. As a gamer you expect a loot box to contain surprises. As a company, randomizing rewards is a great way to keep players paying.

Though for the life of me, I can’t figure out why FIFA 21 fans aren’t demanding the loot box preview system as a permanent feature. FIFA is one of the only games that offers a clear, objective, in-game advantage earned through loot boxes. And that’s not okay for a full priced game that essentially resets it’s multiplayer every year.

Every other developer realized that loot boxes are controversial as is. Random cosmetic are probably fine. But objectively better players in a sports game, that’s a bit shady. By giving players a previewable peek inside a (still randomized, mind you) loot box, it gives gamers some control back.

Yes, the rewards are randomized and reset every day, give or take. But the players get to decide what their real cash buys them, not some non-transparant algorithm. So yeah: ‘E. A. Sports. (Please put that) in the game’.