Cyberpunk 2077’s weapons got an in depth look in the latest Night City Wire live event this week. And we have to say, they look seriously badass. From the looks […]

Cyberpunk 2077’s weapons got an in depth look in the latest Night City Wire live event this week. And we have to say, they look seriously badass. From the looks of it, we will be seeing a multitude of different weapon types and a solid customization mechanic.

In the video we can see five different weapon types. It looks like no matter your weapon preference, you will be able to get your fix on how to slaughter your fellow Night City foes. Let’s take a look at the different types of weapons you’ll see in Cyberpunk 2077.

From what we can see in the video, Cyberware appears to be weapons that are directly integrated into the players body. These implants range from melee weapons to projectile launchers as the video indicates. All we know is the Mantis Blades look absolutely insane.

Melee weapons are self explanatory but don’t let that fool you. Melee weapons are bound to pack a serious punch. And some of them will incorporate a sci-fi spin as you can see with the Thermal Katana, a ninja sword with a ‘ripping hot steel’ blade on it.

Smart weapons appear to be the happy medium between heavy hitters and maneuverability. In this category we see what looks to be SMG’s and some smaller weapons like  the TKI-20 Shingen showcased in the video.

The kicker with Smart weapons is that they have the ability to lock on to targets for even more firepower. As you see in the video, the Shingen has a Micro-Guided Missile that can be used when locking on to ‘Smart Link’s’. We’re sure to learn more about that in the actual game.

Power weapons look like your run-of-the-mill ass kickers. From the video we see the Carnage shotgun. Pretty obvious why they chose that name because it packs a serious punch.

We can also see some assault rifles in the video so Power weapons will be the brute force weapons we are all used to, with a Night City twist of course.

Tech weapons seem to be the “Energy” weapon variant in Cyberpunk 2077. So we can disseminate that the weapons in this category will be along the lines of Railguns, Lasers, Plasma guns, etc.

In the video you can see the Tsunami Nekomata sniper rifle which looks super deadly.

Cyberpunk 2077’s weapons will all be customizable. And the customization seems to be a pretty big part of the progression throughout the game. As your proficiency with a certain gun increases, so does various aspects of that weapon. Your accuracy increases, reloading is faster, etc. 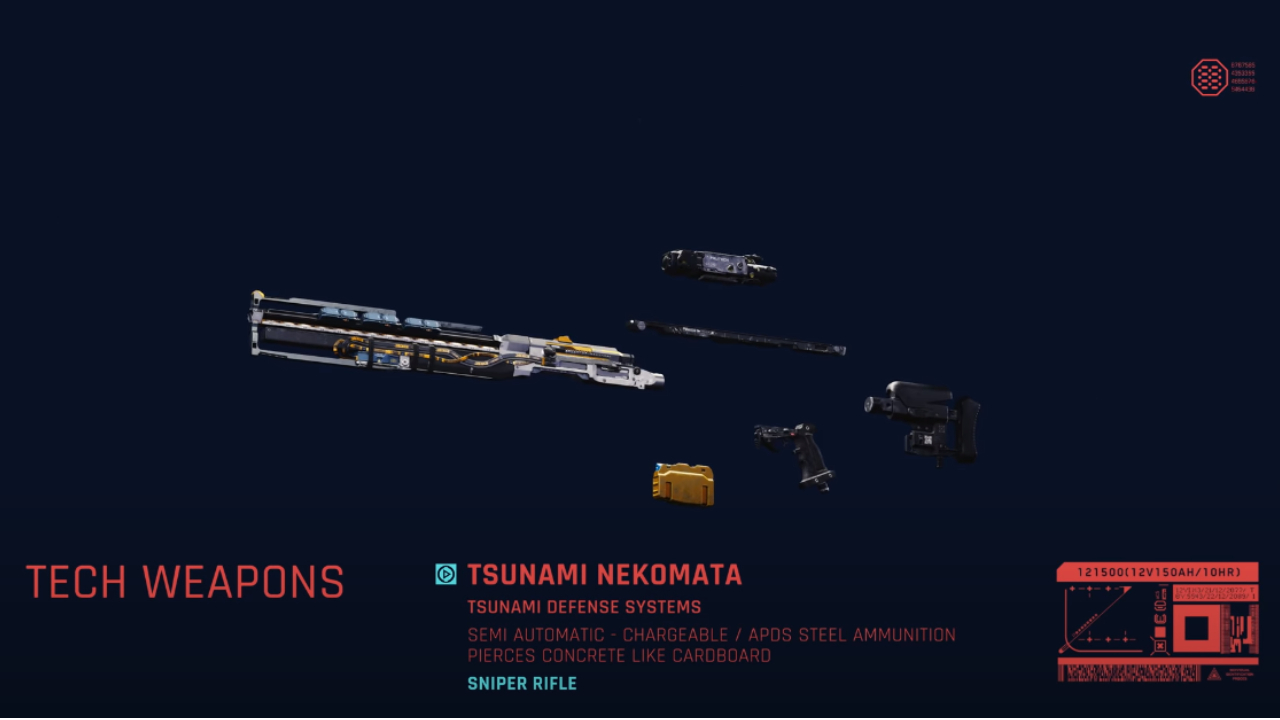 …I think that’s a special experience when you combine it with the way you customize your gun where you get this feeling that this is your signature gun and that you’re really good at using it.


The customization seems to be really in depth in the video, allowing player to change attachments on the fly and install weapon mods for each weapon. Coupling that with the custom paint jobs, this should make for an amazing customized experience as we wreak havoc across Night City.

As more information comes out we will be sure to update our readers. We can’t wait to run through the multiple story lines in Cyberpunk 2077 and check these weapons out some more.