Minecraft consists of two distinct major worlds. The Overworld is full of joy, peaceful trees, nice animals, and calming rivers. And then there’s the Nether; a hellish world of lava, […]

Minecraft consists of two distinct major worlds. The Overworld is full of joy, peaceful trees, nice animals, and calming rivers. And then there’s the Nether; a hellish world of lava, fire and just a bunch more fire and lava. The underworld of Minecraft has just become even more exciting with an upcoming update, overhauling the Nether completely.


The update originally got announced last September, but now we are finally getting an idea of what the underworld will look like based on the newest Minecraft Snapshot. Three new biomes will be added to the Nether, with the original fiery environment being renamed to Nether Wastes. The new biomes are called Soul Sand Valley, Warped Forests, and Crimson Forests.

Soul Sand Valley will be just that, a barren wasteland of soul sand, with skeletal remains of spooky beings scattering throughout. This biome will also contain a new type of fire: soul fire. As if the original nether fire wasn’t fire-y enough, this blue fire basically behaves like regular fire but it’s blue and more spooky.

The blueish Warped Forest is, according to the Minecraft wiki, the most peaceful of all the Nether regions. Endermen will spawn there frequently though, so you still have to watch out where you look, as looking these tall black mobs in the eyes triggers their very powerful rage. This biome is filled with large fungus trees and the new crimson fungi and warped fungi.


Lastly is the Crimson Forest. Looking similar to the Nether as we know it currently, the ground is mostly made up of crimson and warped Nylium blocks. The fungi mentioned above are also a part of this biome. In the Crimson Forest, you’ll also run into the new Hoglin mobs, pig-like animals that will be hostile towards the player. 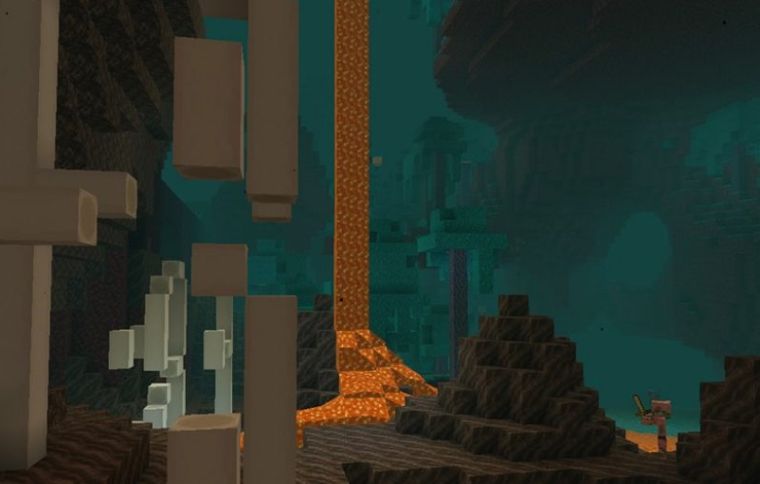 The new Piglin mob will replace the current Zombie Pigman, the most common mob in the Nether. Those are renamed to Zombified Piglin. The regular Piglin behave similar to the Zombified Piglin, with the exception that they really love gold. In fact, a Piglin is hostile by default, but won’t attack you if you are wearing gold armor. You can even barter with them by giving them a gold ingot, giving the otherwise porous material a bigger purpose in the game.

Besides the new Nylium blocks, the Nether update features a very significant new material: Netherite. With Netherite (combined with gold), Minecraft gained a whole new tier of material more important than diamonds. Yup, Netherite armor and weapons are even stronger and more durable than the previous endgame material.

But don’t expect to be as tough as the dragon from the End so easily, as Netherite armor, weapons, and tools can be crafted by coating an existing diamond item with the material. Netherite stuff is tough, but also costly. And did we mention Netherite items do not burn in lava?!

All in all this new update will completely change the way players operate in Minecraft. While the Nether has always been a place where players found exclusive items such as Nether Wart (for potion brewing), Glowstone (for light), and various mob drops like Ghast Tears and Magma Cream, the underworld dimension just gained a whole new dimension.

Players now have loads more stuff to gain from descending to the hellish world. It will completely overhaul the use of gold in the game, give players many new structures to explore like Bastions and Speleothem, and make the Nether a more diverse and interesting region to survive in altogether.

The 1.16 Minecraft Nether update comes out in the first half of 2020. Dedicated players (like us) can install the Snapshot version – a beta test version – through their Minecraft Launcher. For now, only the Java edition of the game receives the update.