In this article we’ll give beginners 5 useful tips to improve their sniper gameplay in PlayerUnknown’s Battlegrounds (PUBG). After all, there’s nothing more satisfying than being almost invisible and dealing […]

In this article we’ll give beginners 5 useful tips to improve their sniper gameplay in PlayerUnknown’s Battlegrounds (PUBG). After all, there’s nothing more satisfying than being almost invisible and dealing death from a distance. Here’s how.

While most players are familiar with the basics of sniping, refining the skills can be a challenge. Sniper rifles in PUBG are powerful, but they are also slow-firing guns with low magazine capacity. And missing that perfect shot can be devastating.

Don’t fret, as we present a guide full of useful tips for PUBG sniper lovers. With our help, you will be picking off enemies in no time. Make sure to equip yourself with some PUBG Mobile UC for all your in-game sniper needs before you jump in!

There are several non-sniper rifle weapons that work as snipers. They are known as Designated Marksman Rifles or DMR’s, and examples include the Mini-14, MK14, SKS, SLR, and VSS Vintorez. It is possible to snipe with them but it is far from ideal because of the high recoil and relatively low damage of these guns.

That brings us to the actual snipers. The snipers in PUBG are bolt action rifles, which means you would have to take time to line up another shot in case you miss the first one. The guns include the AWM, M24, KAR98, Winchester Model 1894, and the Mosin-Nagant, which the developers have said is a KAR98k “for all intents and purposes”. 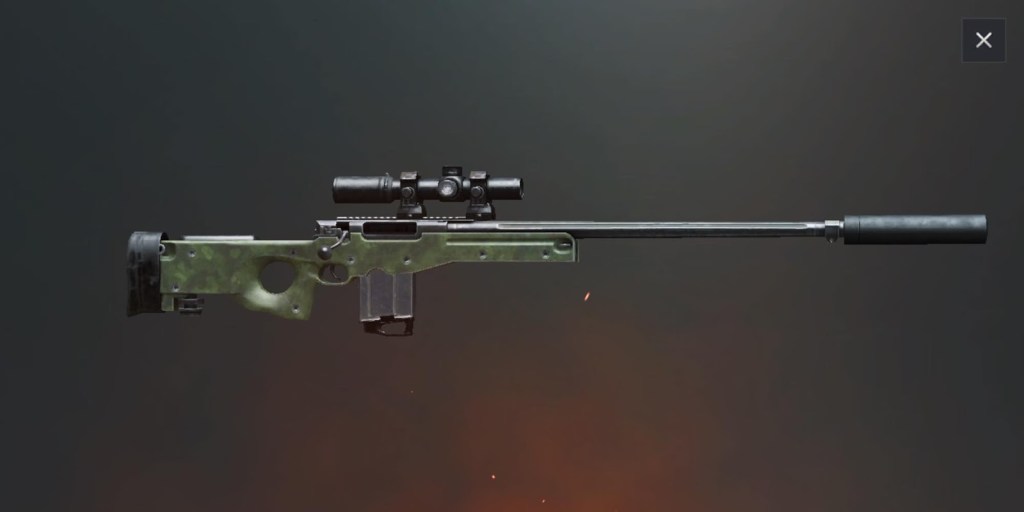 The AWM is at the pinnacle of snipers and its high damage can swing the late game your way. It is the highest-damage dealing gun in all of PUBG and can one-shot even a level three helmet wielder. The major disadvantage is that it uses the precious .300 Magnum ammo. Both the AWM and its ammo can only be found in airdrops.

The M24 too used to be limited to airdrops before an update made it available in regular loot pools. It deals less damage than the AWM and is slightly less accurate, but quick reload speed and higher muzzle velocity make it valuable at range.

Though a classic, the KAR98 is weaker compared to its stronger siblings. The reload speed is slow and though it can knock down a player wearing a level 2 helmet, it’s still lower damage compared to other snipers. The low bullet velocity also makes it tougher to pin down moving enemies. But the KAR98 is readily available across the maps and can be deadly in the right hands.

Winchester 1894 is the weakest and the least damaging of the bunch. Furthermore, its recoil was increased with an update. Unless you know what you’re doing, stay away from this one.

Even before you find your preferred (or any) sniper, you should stock the red-dot scopes, suppressors, and cheek pads you come across. A sniper is only as good as its attachments, and even the deadliest of rifles will falter without them. And if you’re only using the iron sights on your gun, say goodbye to your chances. The attachments are used not just to increase the range but also to reduce recoil, suppress the noise and hide the flashes. 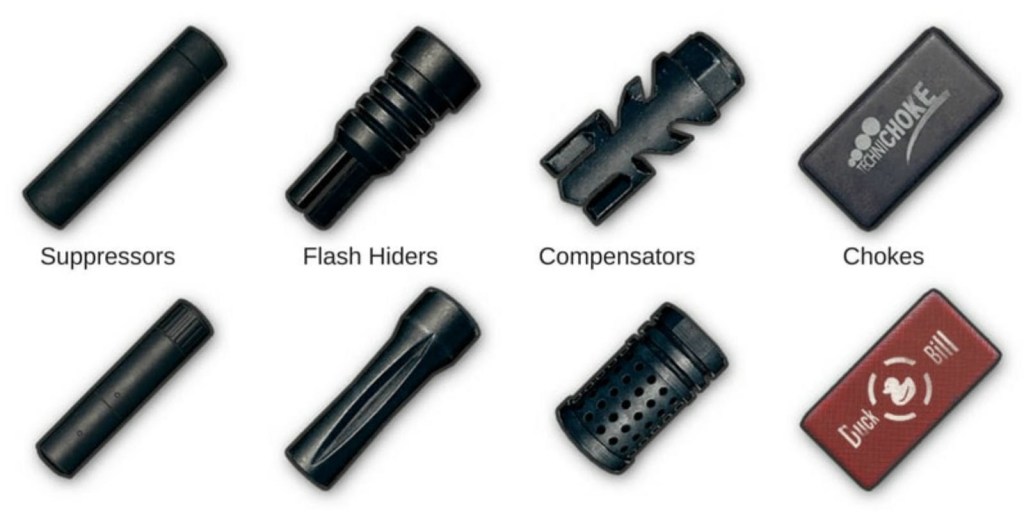 You would need a scope to actually “snipe” and scout buildings out from a safe distance. The precision over range will also increase your efficiency. The ideal scopes for sniping are the 8x and the 15x. While you can use the 4x, the shots will be far less accurate.

You can also find the cheek pad for sniper rifles as well as the ‘compensator’ muzzle attachment, which decreases the recoil and sway. The developers have helped out sniper lovers with an update that introduced the Canted Sight — an attachment that lets you quickly switch between two scopes to make close range gunfights easier.

You can play around with the usual muzzle and suppressor attachments too. But two underrated attachments which will take your sniper game to another level are the Bullet Loops and Extended Quick-Draw magazine. The former increases your reload speed, the latter does the same but also expands the magazine capacity.

Sniper, check. Attachments, check. What about the positioning? Success as a sniper depends as much on your positioning and technique as the equipment you use.

You need to learn the maps inside out. The topography, the high ground, and the best sniping spots. Hills, towers, rooftops are your friends. You should always be in a position with the best range of view. And if you are with a buddy, ask them to coverer you while you engage.

It is also important to keep moving. Sooner or later, other players will figure out where the shots are coming from. And even the best snipers get spotted and killed. Ensure to keep moving and changing positions after every successful shot.

Your body position is also crucial as the accuracy of your shots depends on the stability of your rifle. The best way to do so is by going prone but that can leave you open to advancing enemies. Running and gunning is not an option either. The happy medium is crouching; it will keep your gun stable while keeping you ready to move in case of pushing enemies.

While PUBG is no ARMA 3, the game takes it’s bullet physics quite seriously. The use of ballistics and curvature means a bullet doesn’t travel absolutely straight but curves a little. You have to account for the bullet drop. 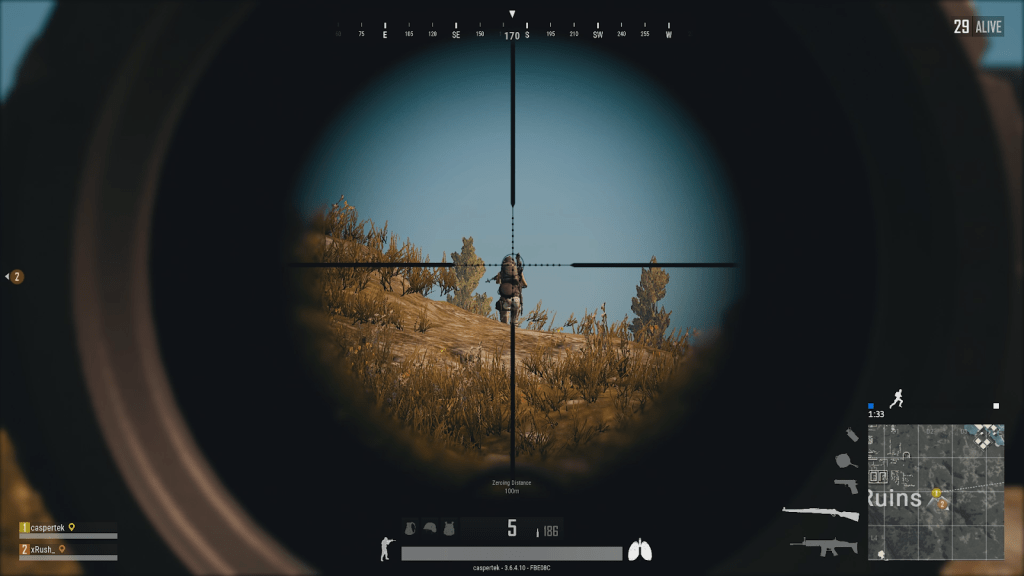 So while you want to aim for the head for a knockdown (if not an outright kill), at a longer distance you would want to keep your aim slightly above the enemy’s head so your shots connect even if the bullet curves. Similarly, in the case of a moving target, you should fire slightly in front of the direction your enemy is running as a bullet takes time to travel to it’s destination.

As you gain more experience, you would do well to practice advanced skills. Try to move when peeking to not just spot the enemies but fire quicker. And focus on quick scoping: lining up a shot as soon as you spot a target. Holding ‘Shift’ before you shoot lets you hold your breath and reduce scope sway.

5. Blend in, but prepare for trouble

For a sniper, remaining undetected is the name of the game. Learning how to use camouflage can get you the cover you need. Be aware of the surroundings and vistas and use outfits and skinsto blend in. You can try and grab a ghillie suit from the airdrops to be the stealthiest of stealthies.

There will, however, be times when you will be ambushed. Or you would have to run in and engage in firefights. As the last of our PUBG beginner tips: a good sniper knows when to put his rifle aside. Always carry an additional weapon — an assault rifle or an SMG — to take care of enemies at close or medium range.

You can have the best equipment, position, and technique but still falter if you lack the key ingredient: patience. Sniping is about lining up that perfect shot. So don’t be discouraged from taking your time and take good aim. Killing or downing the enemy, rather than scraping their armor and letting them regroup or escape, is the difference between defeat and a well-earned chicken dinner.