Skip to content
Game Enthusiast’s Game of the Year 2021: The Results
Community

Game Enthusiast’s Game of the Year 2021: The Results

We asked and you decided what the Game of the Year 2021 should be. Over the past two weeks we’ve amassed hundreds of votes from members of our Facebook community. […]

We asked and you decided what the Game of the Year 2021 should be. Over the past two weeks we’ve amassed hundreds of votes from members of our Facebook community. And you told us loud and clear: Halo Infinite is without a shadow of a doubt the best game of 2021. Here’s all the results.

As we explained in the actual poll article, we selected games based on their mass appeal and entertainment value. We took great care in selecting all the titles that should be up for Game of the Year 2021. Though in retrospect we didn’t have to do any of that.

As it turns out, almost 58% of all Game Enthusiast fans consider Halo Infinite to be the best game of 2021 and we’d definitely have to agree. Its back to basics attitude, gorgeous (heavily reworked) graphics, and old school shooter vibes made it the obvious choice. It didn’t win The Game Award’s Player’s Voice Award for nothing. 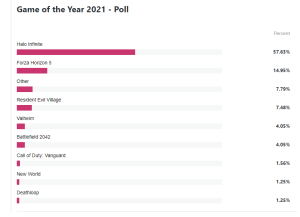 Oof, Battlefield and Call of Duty dropped the ball

Another close to unanimous vote you guys put out is the fact that the recent shooter behemoths Battlefield and Call of Duty sucked. A few dozen people still gave Battlefield 2042 the benefit of the doubt. Two mere handfuls of gamers considered Call of Duty: Vanguard the Game of the Year 2021.

Lastly, lets take a look at the ‘Others’ category. Because we didn’t want to constrict your choice of games, we decided to offer a blank space for voting. That was by far the best decision we ever made.

Apart from that obvious troll, we had a few people vote for 2021 classics like Ghost Recon Breakpoint, Destiny 2, and the magnificent Minecraft. And yes, we know what you’re thinking: “Those games are from 2019, 2017 and freaking 2011 respectively.” You’re absolutely right! Though we can’t help but think those picks were a comment on 2021 as a rocky year for games, nostalgically looking back at the golden days.