Update 22-01-2020: The rumors hinted at in the article below are now confirmed. In fact, the update is live as we speak. Check out the all about the loadout-update here.  […]

Update 22-01-2020:
The rumors hinted at in the article below are now confirmed. In fact, the update is live as we speak. Check out the all about the loadout-update here.

Original article:
Infinity Ward Studio Art Director, Joel Emslie, has stated that more custom loadout slots will be added to Modern Warfare in a coming update. Additional custom loadout slots have been highly requested since launch. It has now been confirmed that you’ll have soon have the ability to build a custom load out for every situation.

Modern Warfare-fan PavilionParty went to Reddit to vent about the amount of custom loadout slots available to him. Studio Art Director, Joel Emslie, who goes by ArtPeasant on Reddit, not only understood the frustration of fans, but also hinted that Infinity Ward is indeed bringing more slots to Modern Warfare soon. 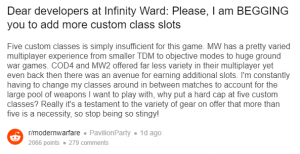 ArtPeasant is however a bit vague in his wording. He does say people complaining about the lack of enough customizable slots are right, and that it’s coming in a future update.. He also states that he’s not sure “about all this”, implying it’s not officially confirmed. Read the full statement below:

You and everyone else that has commented on this are right. Its in mainline back at the studio and weve been tinkering with it. Im not sure which update its in but I think its next. Believe it or not it can cause horrible bugs if not tested properly. Im not certain about all this so don’t get fired up on me if Im wrong. Since I’ve commented here Ill stick with the issue at the studio.

As of yet, players merely have five custom loadout slots to build custom classes. According to many Modern Warfare fans, that’s too little. Sure, tweaking your weapons and load outs has never been as easy and quick as it is in Modern Warfare. But still, customizing gear requires the player to go into a menu and that takes precious seconds of an already lightning fast game.

And with so many awesome toys in the game, it shouldn’t be too much to ask for more slots so players can easily select a new weapon. After all, if you want to get those precious golden weapon camos, you have to play as efficient as possible!